Elizabeth Leach brings text to life. It’s a talent and an art form the Oxford Communications’ Associate Graphic Designer has been honing since her sophomore year at The College of New Jersey.

“I was taking a design class and became interested in finding ways to make words look the way they felt,” said Leach. It was the humble beginning of a journey that has since lead to the development of Leach’s personal hand-lettering business, a burgeoning Instagram following and now, a stop-motion holiday video.


Here’s how the stop-motion video was made.

The original idea for the 2015 Oxford Holiday Video was to combine Elizabeth’s hand-lettering talent with stop-motion videography to mimic a Jackson Pollock-like visual experience. From the viewer’s perspective, specks of ink would appear on a blank canvas and then grow outward, in cadence to music, ultimately combining to reveal a holiday message.

To bring the idea to life, the Oxford team combined a GoPro Hero 4 Silver with a two-light production setup.

Like most hand-lettering artists, Elizabeth draws in a linear, left-to-right fashion, which was not the Creative’s team ideal direction for the video. To overcome this obstacle, Oxford’s Video Production team used a pre-drawn outline, Plexiglass, and two 1x1 Litepanels to stage the stop-motion setup.

Lower Light: In between stop-motion shots, the lower light would illuminate, shining the pre-drawn outline through the canvas. This action allowed Elizabeth to position dots and lines in the desired, though seemingly disorganized, positions.


Key Light: Once the appropriate dots or lines were drawn, the team would switch off the lower light and illuminate the above mounted key light. 10 seconds of video would be captured, then the key light would be turned off and the process would begin again. 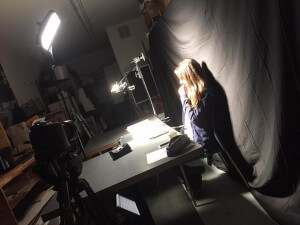 The Oxford video production team counted all of the beats in a 45-second segment of George Winston’s Carol of the Bells and determined the project would require between 70 and 94 frames to make the ink grow appropriately on screen.

A GoPro Hero 4 Silver was mounted to a C-stand and positioned two feet directly above the middle of the canvas. The GoPro’s built in Wi-Fi allowed the team to control recording hands free from a smartphone, ultimately eliminating the potential for camera shake and distortion.

About halfway through the three-hour taping session, the GoPro’s battery died. Rule number one of stop-motion is not to move the camera, but with a minimum of 24 frames to go, the team had to improvise. Elizabeth and the crew stabilized the C-Stand arm and the GoPro casing with boxes and home decorating samples to allow them to replace the battery with as little position shift as possible.

Even with the gallant stabilization efforts, the act of changing the GoPro battery shifted the position by over 100 points on the horizontal axis, 21 points on the vertical axis and .08 degrees of rotation. That snafu earned the editor an extra two hours in post-production to correct the alignment, but the results speak for themselves. See if you can guess where the shift occurred.

With the shots aligned and the music set, Oxford’s social media team weighed in with distribution best practices. It was decided the full 45-second version of the video would be used on YouTube and shared on Facebook while a shorter, 15-second video would be needed for Instagram and an external eblast.

The final result was Brilliant and successfully brought a bit of “Peace & Joy” to our clients and followers.