Oxford was tasked with first strengthening and building recognition of the homegrown brand through a strategic social campaign on Facebook – while creating a valuable resource and interactive forum for current and potential policyholders.

They then engaged us to develop an integrated campaign encompassing online, traditional and video messaging to bring home the message that NJM has been here and will always be here for its policyholders.

How We Made It Brilliant:

To start, we knew the key to NJM’s continued success was to keep it real and close to home. Over eight months, we grew the Facebook fan base from 260 to more than 14,400 loyal fans and achieved a total of 8.4 million impressions by touting the company’s heritage and competitive offerings, and providing relevant, entertaining information to fans. We maximized the brand’s exposure by executing an integrated Facebook Ad campaign seen by more than 1.4 million unique users.

In January 2013, NJM’s Facebook page was recognized by a leading insurance industry research group as the second most engaging insurance page nationwide, beating out Flo, Mayhem and a gecko.

In 2015, we brought the NJM message, specifically auto insurance, to a larger audience by moving to an offline medium. We filmed a short “man on the street” video asking passersby in Princeton, NJ, “What they would do with an extra $100?” – the average amount NJM policyholders received back from NJM’s yearly dividend initiative – and created an infographic from the answers we received. 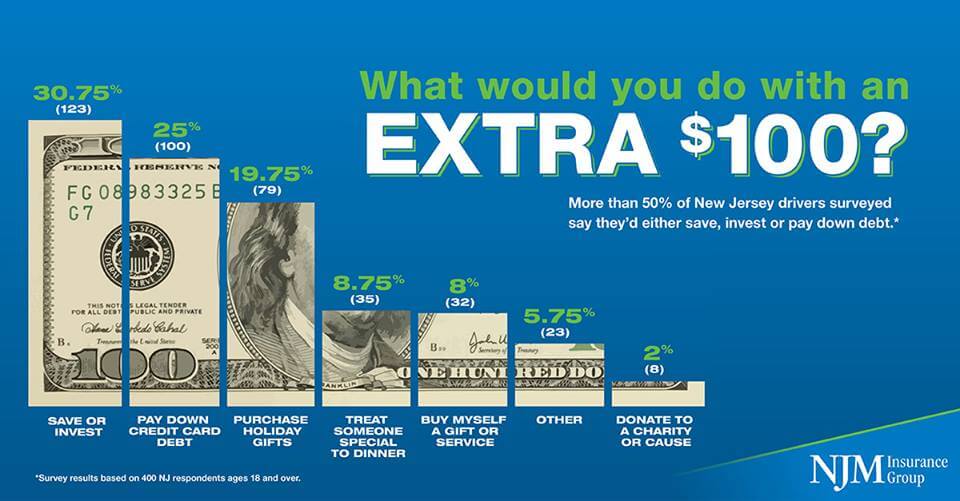 Other PR video efforts included going on-site to NJM’s office to record behind-the-scenes footage of the process of mailing out the dividend checks to auto insurance policyholders, as well as visiting NJM’s office to see the New Jersey Hall of Fame Mobile Museum parked at the company’s facilities to record and distribute video of the event to local news stations.

To reach prospective policyholders, we created eblasts, direct mail and print ads challenging recipients’ perspectives of auto insurance companies, elaborating on the benefits that come with becoming an NJM policyholder.